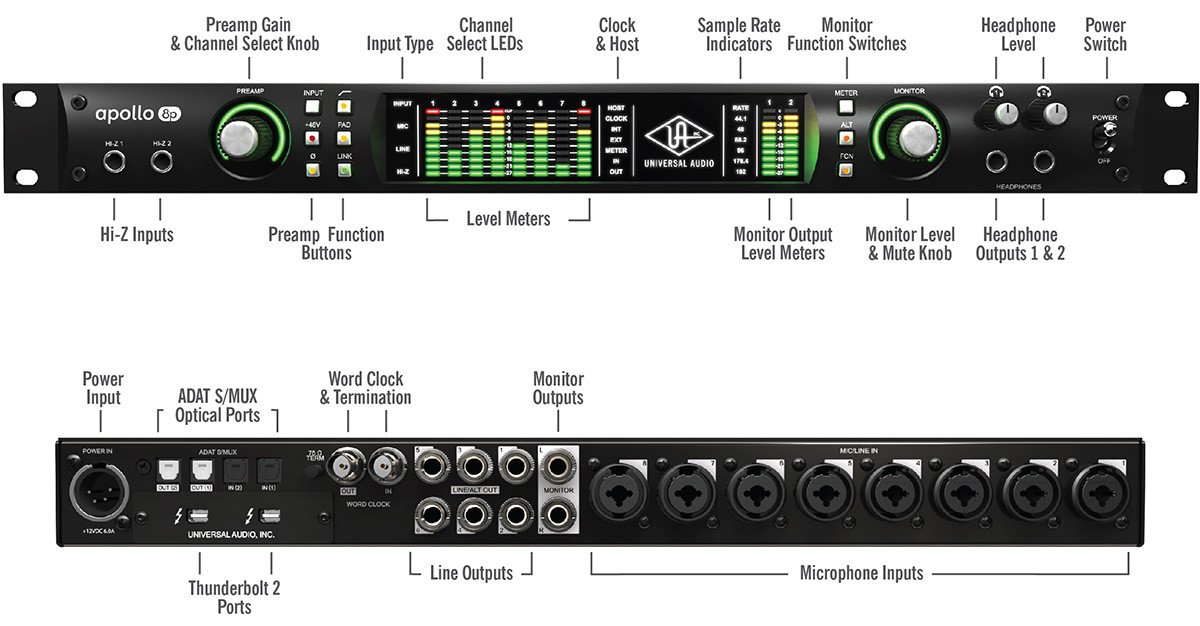 "Universal Audio is synonymous with pioneering audio quality on the highest level. We’re all familiar with the company’s extensive hardware outboard range and the groundbreaking work Universal Audio has done on the DSP and plug-in side of our industry. The Apollo 8p is the latest in the company’s I/O range, breaking new ground while maintaining the quality users now expect. The Apollo 8p is a superb interface. If you’re looking for a box that will give you crisp and clean microphone preamps with the ability to turn them into classic and vintage sounding ones, look no further. Eight preamps, multichannel outs, super low latency, onboard processing and the best of the analog world combined with ahead-of-the-curve digital technology make Universal Audio’s Apollo 8p a true winner. Oh, and if you haven’t tried those UAD plug-ins yet, do so today. They’ll blow your mind!" - Wes Maebe, Mix Magazine

“Using my Apollos with Apollo Expanded software and Console 2.0, I was able to front a live mix, do a monitor mix, and record to Pro Tools, all at the same time. That’s pretty awesome.” - Chris Dugan (Green Day, Iggy Pop, U2)

The original Apollo, introduced in 2012, quickly became a gold standard among modern music producers and engineers — it now counts many of the world’s top artists as users. Apollo 8p improves upon the original Apollo’s sound quality with completely redesigned, class-leading A/D and D/A conversion — giving you increased dynamic range and even lower THD. Building upon a 50-year legacy of circuit design, UA engineers started with obsessive auditioning of the latest converters, pairing them with completely redesigned analog circuitry. After extensive double-blind listening tests, the result is is 3 dB better dynamic range on both A/D and D/A conversion versus the original Apollo, placing the Apollo 8p as the measurable class leader.

The key to its analog sound is onboard UAD-2 QUAD DSP Processing, which powers the UAD plug-ins while reducing the strain on your host computer.

Apollo 8p comes bundled with “Realtime Analog Classics Plus” suite of UAD plug-ins. From there, you can choose from a vast and expanding collection of plug-ins in the UA Online Store.

"UAD plug-ins are amazing... I’ve used them on all my projects for the last few years.” - Dan Auerbach (The Black Keys)

Apollo 8p comes equipped with eight Unison-enabled mic preamps, letting you track larger projects with colorful mic preamp sounds from Neve, API, and Universal Audio. An Apollo breakthrough, Unison technology nails the tone of these sought-after tube and solid state mic preamps — including their impedance, gain stage “sweet spots,” and component-level circuit behaviors. The secret to Unison is its hardware-software integration between Apollo’s mic preamps and its onboard UAD-2 processing. Simply place a selected tube or solid state preamp plug-in on your desired mic input, and record in real time through stunning emulations like the bundled UA 610-B Tube Preamp plug-in, or the Neve 1073 and
API 212L.

Apollo 8p features a host of front-panel upgrades over the original Apollo, including Alt Speakers, Dim, and Mono functions as well as input and output metering capabilities.